For All motorbike lovers 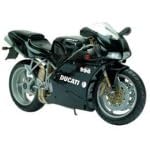 
Casey Stoner it is, born in Gold Coast in Queensland, Australia.He currently competes in the MotoGP class for the Ducati Marlboro team.

His first race was when he was four years old, in an under nine years old race at the Hatcher's dirt racing track on the Gold Coast of Australia. Between his very first race win at the age of nine and the age of fourteen, young Casey Stoner won 41 dirt and long track titles and 70 state titles. One feat he achieved that illustrates his passion and "need" for racing was done at age twelve. Over one weekend he raced in 5 different categories in all 7 rounds of each capacity. A weekend consisting of 35 different races... Not only did he compete in all these categories and different engine capacities, the young Casey Stoner went on to win 32 out of the 35 races. There were five Australian titles to be won that weekend, Casey Stoner won all 5.

The legal age to enter into road races in Australia is 16, at 14 years old Casey Stoner and his parents agreed he was ready to move up onto road racing so they packed up the family and moved to England - reason being that the legal age for road racing in that country is 14.

From 2000 to 2002, he contested the national 125cc GP championships in Britain and Spain, winning the English 125cc Aprilia Championship in 2000, before moving fulltime to the 250cc GP World Championships in 2002. His season on an Aprilia under the guidance of Lucio Cecchinello was turbulent, with no podium places from 15 race starts.....